Welcome to our Spring 2018 Newsletter.

Once again, I am writing this as we are harvesting cauliflowers-the spring variety this time. Isn’t it great the light evenings are with us. It’s been a real pleasure to be able to take our time when working on our sites rather than having to pack it all into short days. What’s more we are on target! All our March jobs are done and this includes resowing beetroots after the mice visited poly tunnel 4. We are hoping the sonic devices we’ve now installed will work.

As you know, it’s not all growing at FoodSmiles. I’ve had a satisfying time organising the ‘workshop’. It’s amazing what useful things we have that had been forgotten about! 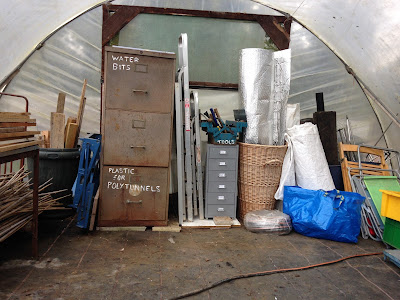 Ron’s been busy erecting supports over the Purple Sprouting.

And the solar panel is now in situ – it’s quite a structure and soon we are hoping to add another that was donated by Ayletts. Well done to all involved in this engineering feat! 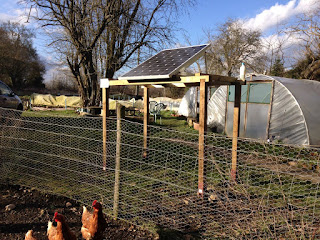 Hot off the press - FoodSmiles were at the Mayor’s Pride Awards at the end of March and came away runners - up in the Environmental Champion category. 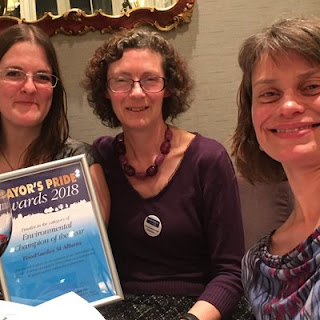 The highlight of this quarter was Howard Roberts’ (“the Farmer”) talk “Back to the Future with Organic Farming” at our Coffee morning at the Courtyard Café. When the family first took on Hammonds End Farm on in 1955, it had one member of staff looking after each of sheep, cows, pigs, horses, chickens, potatoes, brussels and gigantic cabbage for animal feed; it was a ‘typical’ Hertfordshire farm.

In 1960 the Government offered grants to encourage a switch to large scale cereal production and the use of agrochemicals to control pests, weeds and crop height. In 1985 Howard left banking and together with his wife Ginny, took over the running of the 260 acres farm. 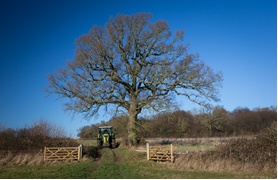 It wasn’t until 1995 that they started to make changes such as letting out the livery yard and farm buildings and following another government push (reversal? in favour of the environment), took a ‘leap into the unknown’ and started to switch to an organic approach not dissimilar to that followed by Mr Roberts senior in 1955! Now, following some encouragement from Redbournbury Mill, the core business is growing organic cereals for mills using 13 fields and a 5-7 year growing rotation:


With the change of distribution from 25 ton lorries to 25kg sacks and the help of social media, Hammonds End now supplies organic cereals all-round the UK and exports to Belgium and N. Ireland. With Stuart’s recent election to Vice President of the National Farmer’s Union, there is a lot to be proud of!

Whilst we only had a few visitors to our 2 March Open Days, it’s quality, not quantity that counts. We’re hopeful 3 out of 4 will join us and bring our annual renewal membership up to 31. Our next Open Days are part of Sustainable St Albans week:

Our new banners will be there for all to see!

Once again, Ayletts have helped us out.  This time with some former Christmas trees which make a lovely springy path. Do go into the garden and have a look around. 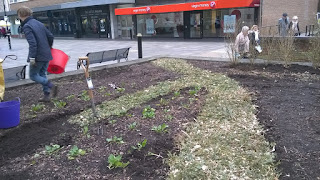 The message is out there! As well as our own Russell Avenue site (for which we’ve just received the Licence from the Council), there is talk of a separate Incredible Edible garden at the Jubilee Centre and Look St Albans! are doing their best to influence new developments so they are sympathetic to the landscape and include green space. We may have a busy time ahead! In January, Janet joined the Look Chairman in presenting at a Workshop for students from Hatfield University. 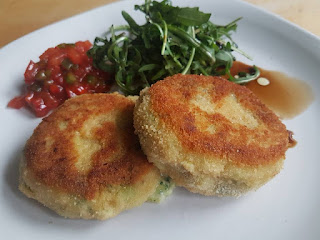 Method
To make the cakes, peel the potatoes and cut into large chunks. Boil for 10 minutes or until soft. Drain and mash with the butter. Chop the veg up and slowly sweat in a pan with a little oil until soft. Grate the cheese into the bowl and then mix all the ingredients together. Let the mix cool in the fridge for at least 20 minutes. Make the mix into cakes (about 100g each).

To make the salsa, fine dice the veg and mix all ingredients together. Serve with a rocket salad.