‘Tis the season of cold and mud ………. and time to move inside. 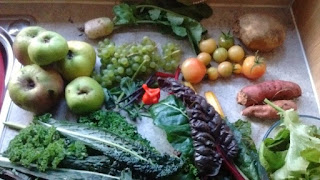 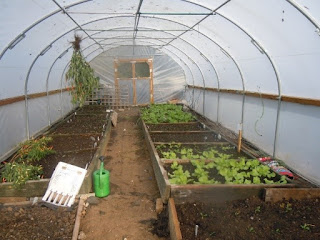 The Autumn Vegetable Box & Polytunnel 2 planted with winter crops (and the last of the chillis!)

As autumn turns to winter, the delicate summer crops have finished and we have moved onto the more robust winter crops and planted up the polytunnels for late winter and early spring crops.

At Hammonds End the outside vegetable beds have been emptied and the remains of beans, cucumbers, tomatoes, calabrese and courgettes have been chopped and added to the compost heap. The smaller you chop the pieces, the larger the surface area for bacteria to break-down the stems and leaves and the quicker it turns to compost.

The empty beds have been sown with a green manure to keep the soil covered in winter and we have added our own “Foodsmiles made” compost to the raised beds in the Polytunnels.

Harvesting has moved from the squash, cucumber, tomatoes and chillis onto kale, perpetual spinach, chard and swede and the end of the salad and we will soon be tucking into the leeks, cabbage and cauliflower. 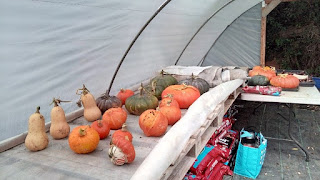 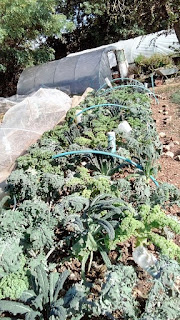 The squash harvest ripening in the polytunnel & kale ready for harvest

The onion and garlic were planted in October and are now coming up ready for harvesting next spring. 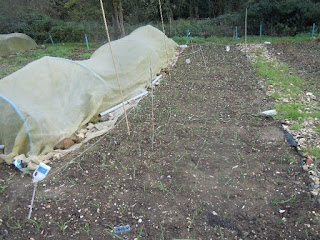 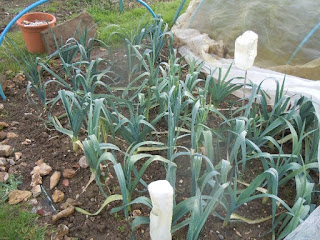 October and November have not been kind on the weather front with much higher levels of rain and lower sunlight than average resulting in some of the winter polytunnel crops being slow to get going.

This has not been helped by mice stealing the spinach and lettuce seeds and feasting on the seedlings planted out to grow in Polytunnel 4. This means we may be low on vegetables in the “UK Hunger Gap” next year. If anyone has any ideas how to protect the juicy tender crops from rodents please say!

What is the Hungry Gap? The Hungry Gap is the hardest time of year for UK farmers: a few weeks, usually in April, May and early June, after the winter crops have ended but before the new season's plantings are ready to be harvested. It all comes down to the UK's latitude.
On the positive front the newly enlarged polytunnel 2 is full of winter spinach, rocket, turnip, mizuna and carrots to keep us going in early spring. No mice in that one!

The big project of autumn has been refurbishing Polytunnel 3 – replacing the cover and adding some new doors and raised beds. It has been very wet and muddy work but thanks to our members determination we have now completed this. We have also improved our capacity for harvesting rainwater from the polytunnels digging large capacity water tanks into the Hertfordshire clay. These will be connected to pumps to irrigate the crops next summer, reducing water use and saving us time. 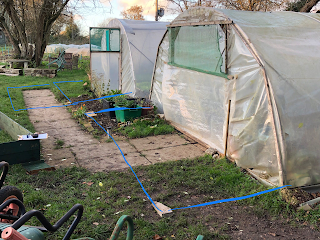 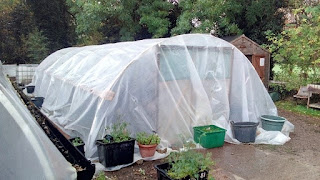 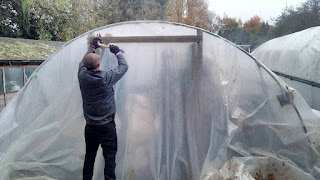 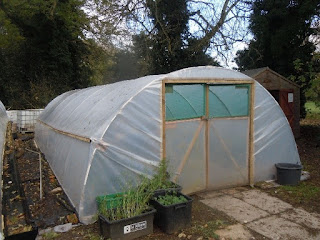 I’ll stop moaning about the weather – but would like some dry bright days to get some growth in the polytunnel crops before it turns too cold!

Harvests from our Hixberry site are well up on last year (almost double!) showing that whilst clay soils may be difficult to work, they are very fertile. We recently harvested a good crop of Jerusalem artichokes which was a new veg for members’ boxes. 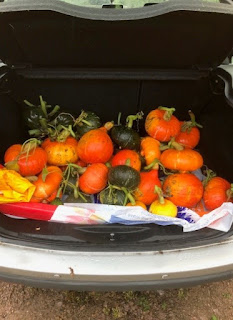 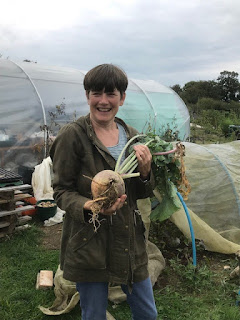 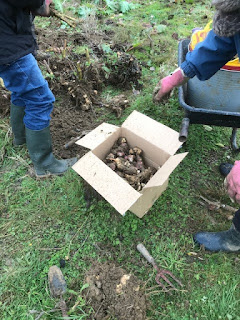 We have also been working hard on developing our fruit area more than doubling the size of the strawberry patch and planting out some great looking blackcurrant bushes we grew from cuttings.
Over the winter we plan to increase the area for growing crops in the polytunnel to get more from this great resource.
In the polytunnel we are still harvesting fun shaped chillies from plants grown from seed saved by a member. 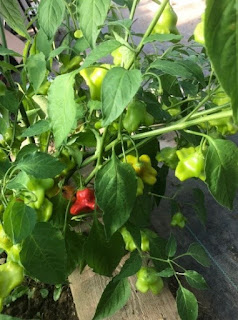 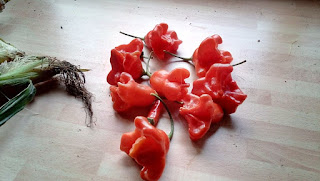 The Incredible Edible gardens will have NO WORK SESSIONS in December – we will return in January ready for winter jobs such as improving our paths and pruning fruit bushes. When you’re planning your Christmas dinner don’t forget that both gardens, especially the Civic Centre, have free herbs such as bay, rosemary, thyme and sage to pick all year round. Other crops to look out for over winter are parsley, lamb’s lettuce and winter purslane – all welcome greens in the dark months when there’s not much else green growing. Winter purslane in particular is extremely abundant at the Civic Centre garden – it’s a mild but succulent salad leaf, high in omega-3 fatty acids, which is a great addition to salads and sandwiches. We weeded out and threw away sacks full at the end of last winter so don’t be shy – PLEASE do help yourself! 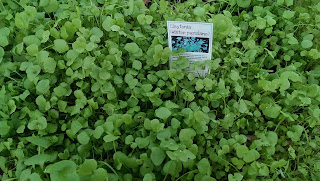 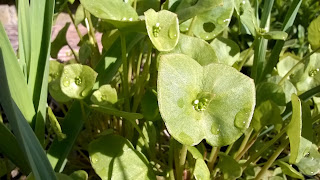 We need more volunteers to help the gardens reach their full potential, so please have a think about whether you’d like to get involved next year. No experience is required and we’re a friendly bunch to work with – just drop in to any of our sessions to get involved. And look out for extra events coming soon too, such as workshops and social events…

There has been a lot of interest over the autumn months in the many different fungi popping up around the gardens. These all occur naturally – we haven’t put them there – and we are not mushroom experts so we can’t tell you whether or not they are edible varieties, so please don’t go picking them unless you know exactly what you’re doing! They are rather beautiful and an important (and amazing!) part of the ecosystem, so we tend to leave them where they are for your viewing pleasure. And for your reading pleasure, here’s a little bit about these remarkable organisms. 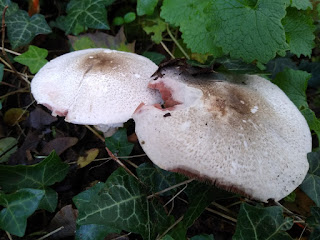 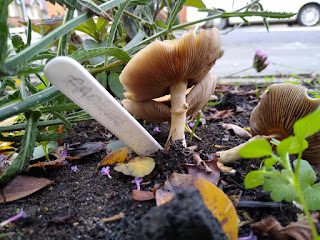 1)      Fungi are not in the plant kingdom but in a kingdom all of their own – in fact, they are more closely related to humans than plants!

2)      Like human skin, mushrooms create vitamin D when exposed to sunlight – this means you can increase your vitamin D intake by leaving your mushrooms in the sun for an hour or two before eating them. Or by sun-drying them!

3)      The primary component of the cell walls of fungi is a substance called chitin, which also makes up fish scales and the shells of insects and crustaceans.

4)      Mushrooms are the fruiting bodies of an underground organism, the vegetative part of which is a branching network of root-like fibres called mycelium. The biggest fungus (and the biggest organism) in the world is believed to be a honey fungus (Armillaria solidipes) in Oregon, USA, which measures 3.4 miles across!

5)      Mycelium forms relationships with plants – particularly trees – and actually helps supply their roots with extra water and nutrients from the soil in exchange for food; a little sugar from the roots.

6)      This underground network of mycelium links trees in such a way that they actually communicate with each other through it. For example, if one tree is under pest attack, it releases chemical signals which ‘warn’ other trees to raise their defences. As another example, some trees have been found to send extra resources via the network to new saplings of their own species nearby, to support them.

7)      Fungi are hugely important as decomposers of waste in nature; they release enzymes to break the decaying material down, and then they absorb its nutrients. That’s one reason fungi are often seen on dead wood.

8)      But it’s not only dead plant matter that fungi can absorb – they have also been used to clean up oil spills, toxic chemicals, plastic waste, and even radiation!

9)      Fungi can even make it rain! In the Amazon rainforest, the spores released by certain mushrooms in dry weather actually help to seed new rain clouds above.

10)   There are 15,000 types of wild fungi in the UK. About 200 are edible, and about 50 poisonous. Some have impressive medicinal qualities. Many of the toxic varieties will only cause gastric upset, but of the most toxic species, one small slice is enough to kill several people and there is no antidote or cure! 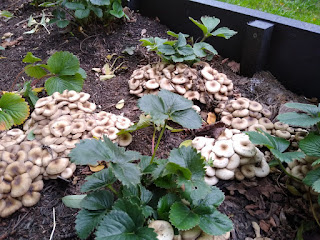 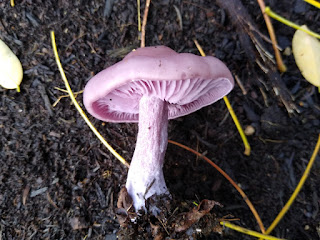 Friends of Foodsmiles are welcome to come to work informally at the farm whenever they need some hearty exercise and company (and probably cake too)! It would be great to see you so please come along and say hello - there is always plenty to do! If you are interested, please contact us and we can let you know when we are working on site. You can also go on our 'active friends' list and receive our site newsletter if you wish to do this regularly (membership@foodsmilesstalbans.org.uk).

Date for the Diary: Foodsmiles AGM will be held on 6th February 2020 in the Council Chambers in Harpenden – all Members and Friends of Foodsmiles very welcome. Watch out for the formal invite in the New Year.
If you are interested in being on the committee, please talk to one of the site managers.

Fry leeks, onion, cashews and garlic in butter until tender. Remove from the heat. Stir in flour. Return to heat. Gradually add milk. Bring to the boil stirring continuously. Add parsley and seasoning. Serve in split jacket potatoes with a crisp winter salad.

And finally, the muddiest site manager award goes to... 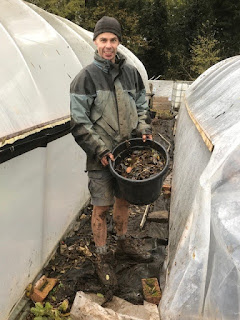