40 Things To Do With A Pumpkin (Or A Winter Squash) Pumpkins and winter squash are really the same vegetable, though different varieties have slightly varying flavours and textures – and of course a wonderful range of colours and shapes! In fact, almost all edible squash varieties fit into three large families, and there are types we'd recognise as 'pumpkins' in every family! Cucurbita pepo includes most summer squash, including all courgettes, pattypan squash (flat, scalloped varieties) and crookneck squash, as well as winter-storing spaghetti squash, acorn squash (ribbed, heart-shaped varieties) and most small, round, orange pumpkins. Cucurbita moschata includes the popular butternut, a few crookneck varieties such as 'tromboncino', and 'cheese'-type pumpkins (wide and flat, like a wheel of cheese, usually with cream or brown skin rather than orange) including the slow-ripening but delicious 'Musquee de Provence' that we have grown this year. Cucurbita maxima contains arguably the most flavoursome squashes, including the largest orange pumpkins such as 'Atlantic Giant' and the 'Cinderella' variety we grew this year, long straight 'banana' squashes, teardrop-shaped 'hubbard' squashes, the small bright orange or blue 'kuri' squashes, 'buttercup' types and the impressive 'Turk's turban'. 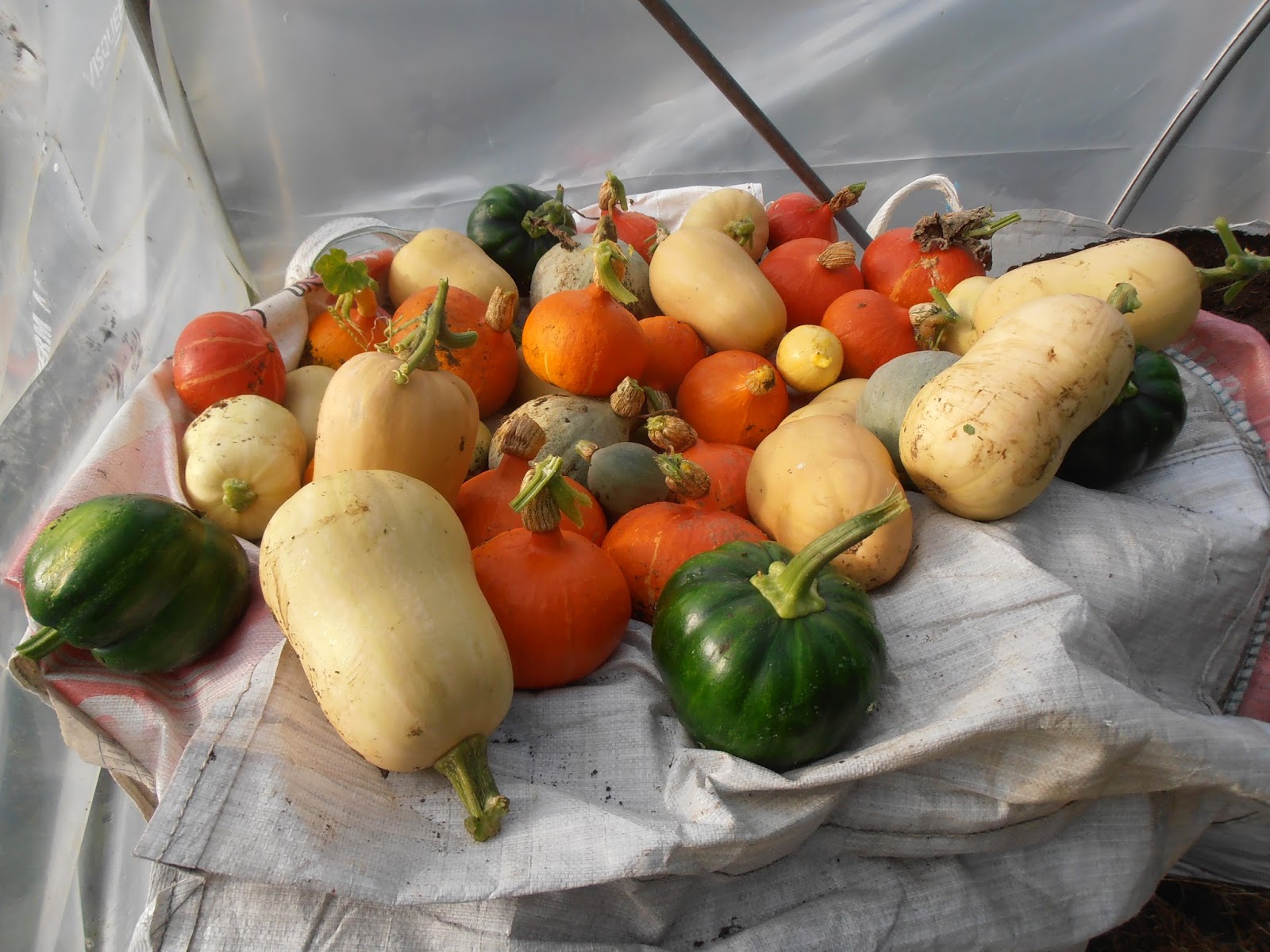 All winter squash are low in calories and packed with vitamin A, as well as a multitude of phytonutrients and antioxidants, and significant helpings of vitamin C, B6, magnesium and potassium. They are easily stored at room temperature for many months as long as they're undamaged, so they can be a really valuable source of nutrition through leaner winter months.


With so much going for them, I'm often amazed by how many people think all you can cook with a pumpkin is soup or pie, usually spiced so heavily that you'd barely know there was any pumpkin in there at all. Yes, squashes suit those warming Christmassy spices – cinnamon, nutmeg, cloves, ginger, allspice and so on – but they go great in a huge range of other dishes too, paired with hotter spices, cheeses, dark leafy greens, nuts, hardy winter herbs (especially sage), salty meats, and flavours that emphasise their sweetness, such as honey, maple syrup or vanilla. So I've written this post to show that squashes and pumpkins of all kinds are useful – and delicious! – in a huge range of savoury dishes as well as the classic soup and desserts, and you'll have no excuse to get bored with the many pumpkins we'll be eating over the course of this winter!
The basics:

1 - One of the simplest ways to cook a pumpkin or winter squash is to cut it into wedges, leaving the skin on but removing the seeds, rub with your choice of oil and spices or seasonings, and roasting for 30-40 minutes. With many varieties, the skin is perfectly edible when cooked well, but if you prefer you can easily peel it off on the plate with minimal waste. Experiment with different spices and flavoured oils – chilli is a popular choice but virtually any aromatic spice suits pumpkin. Or try drizzling with honey or maple syrup to emphasise the sweetness.

2 - If you need pumpkin puree for a recipe, simply cut your squash in half, scoop out the seeds, and place the halves cut-side down on a large baking tray with a few millimetres of water in the bottom. Baking time will depend on the thickness of the flesh, but when it's done it should be soft and the skin will peel off easily. Cut up the flesh and leave it to drain in a sieve for a couple of hours – especially with pumpkins which can be more watery than other squash – and then blend to a puree. (Alternatively you can cube the flesh, put it in a saucepan with a little bit of water or butter and steam or saute gently until soft.)

3 - Serve squash mash as a side dish – just add butter and season to taste – or mash it up with other veg if you like. You could also add roasted garlic, or sage and creme fraiche, or other herbs and spices to suit you. 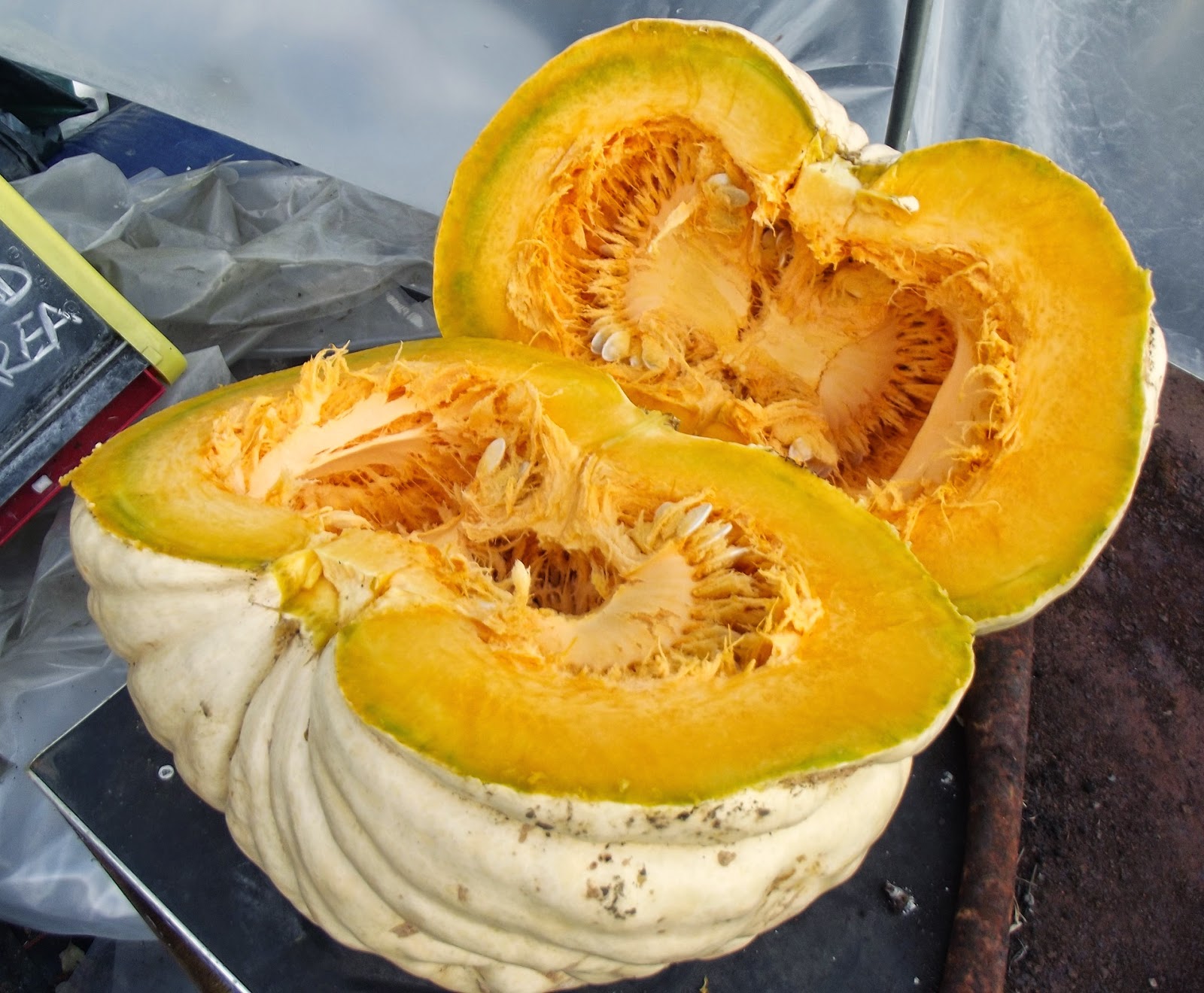 4 - Add squash cubes to a medley of roasted vegetables such as parsnips, beetroots, sweet potatoes, potatoes and carrots, and serve as a side with virtually anything. Again, feel free to experiment with spices, seasonings and oils.

5 - Steam thin slices of squash. Try it with pak choi or bok choi and a ginger-sesame sauce for an Asian-themed side dish, like this.

6 - Squash can be eaten raw – it's similar to melon but less sweet. Grate, julienne or slice thinly into salads, or add to juices and smoothies.

7 - Squash is great in a curry. Add it to your favourite curry recipe around 20 minutes before the end of cooking, or try this recipe for squash, chickpea and spinach curry.

8 - Also try them in a spicy North African stew like this speckle-eye squash stew!

9 - Put diced squash in a Moroccan-style tagine, such as this one, with chickpeas, sweet potato, sultanas and other veggies, spiced with cinnamon, cumin and coriander, and topped with toasted almonds.

11 - Porotos Granados is a traditional Chilean squash and bean stew, spiced with smoked paprika and oregano and absolutely packed with nutritious veggies. 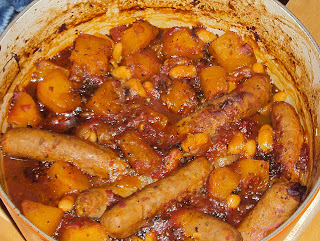 12 - Squash goes great with salty meats such as sausages, bacon and chorizo – this sausage and pumpkin casserole is one of my absolute favourites! Don't worry about using dried sage instead of fresh if it's easier, and skip the shallots if you don't have them.

13 - Pair roast squash cubes with chorizo fried until it's sizzling, add roasted shallots or red onions and some spicy rocket, and wrap the mixture in tortillas for a Mexican-themed meal. Serve with classic Mexican sides such as guacamole, salsa, refried beans and sour cream.

14 - Or add roasted squash cubes and fried chorizo slices to a salad with lots of well-dressed leafy greens and some finely sliced onion. (For vegetarians, salty feta cubes make a good substitute.)

15 - Here's a super-easy squash and chorizo stew – it's even better with diced peppers and a can of white beans added too (add the peppers with the onion, and the beans five minutes before serving).

16 - Make a simple squash and bacon hash by frying diced onion, potato, bacon and squash together, and serve with a poached egg. Add chilli too if you like!

17 - How about a tasty squash and sausage stuffing for your Sunday roast or Christmas dinner? 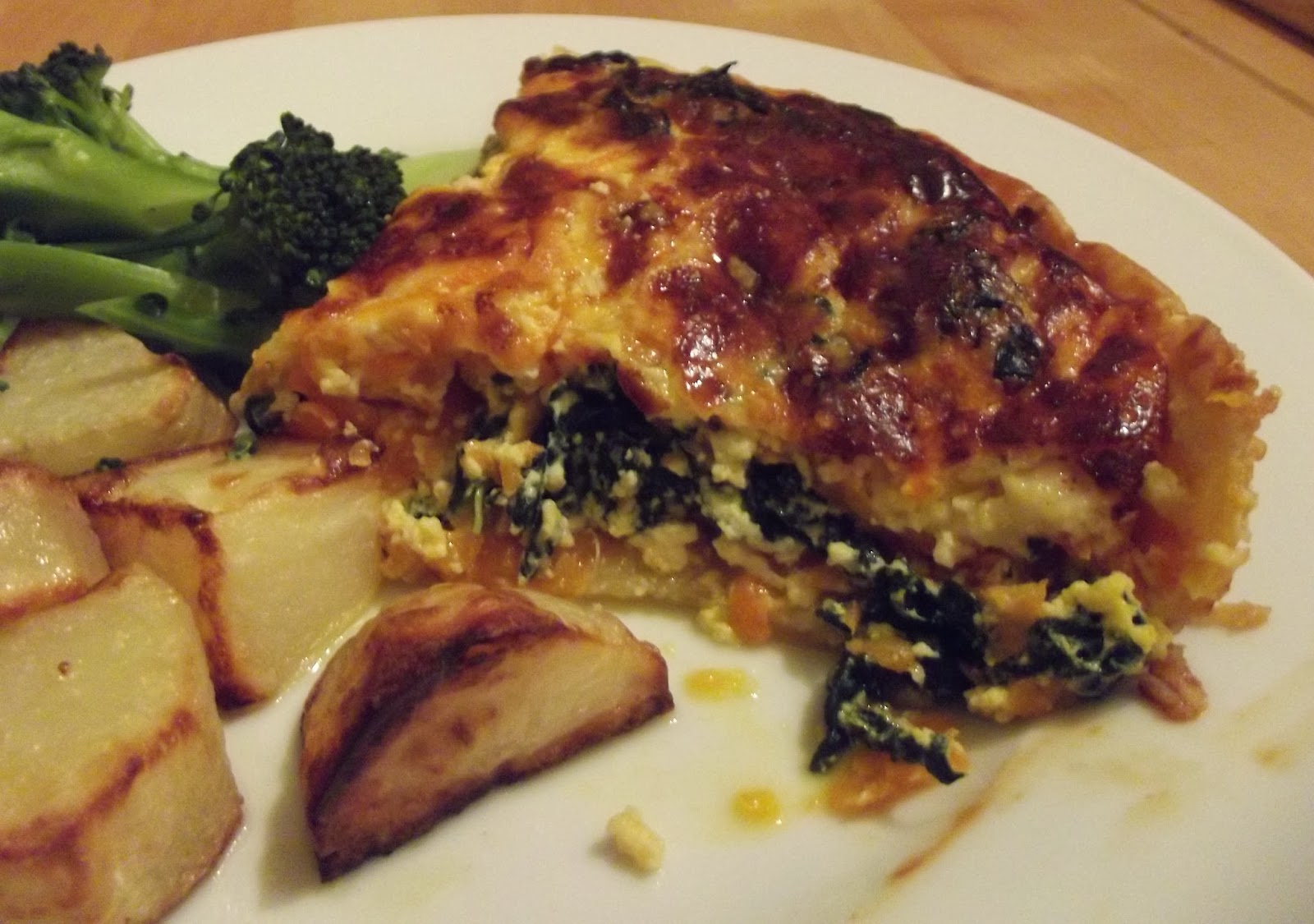 18 - Squash also complements rich, creamy cheeses and dark winter greens such as kale, chard or spinach. This squash and kale tart is a rich, cheesy treat that makes great use of autumn and winter produce.

19 - Mix squash with gnocchi, any dark leafy greens, a hit of chilli and a rich melty cheese of your choice. The blogger who introduced me to this recipe calls it greens and squash gnocchi with chilli and Roquefort. I prefer "squashy gnoshi".

20 - Who could resist an oozy, creamy pumpkin and gruyere gratin...?

21 - Here's a recipe for an awesome vegetarian squash and blue cheese pie:

22 - Mashed squash is a good base for a pasta bake. Try pan-frying chopped chorizo with red onion, adding chopped chard or spinach until it wilts, seasoning with nutmeg, pepper and sage, then mixing it all up together with mashed roasted squash and cooked pasta, grated cheese and a splash of milk or stock, and bunging it in the oven until golden on top. Or customise the above with your choice of veggies, meats and herbs or spices. Or try adding pecans or hazelnuts instead of chorizo! Or for more cheesy pumpkiny pasta creations try this pumpkin maple macaroni cheese, or this pumpkin parmesan spaghetti.

23 - In fact, the number of pumpkin pasta recipes out there is almost endless: try pumpkin, broccoli and bacon pasta, or pumpkin creme fraiche spaghetti with fried onions and sage leaves, or creamy pumpkin baked rigatoni too.

24 - It's a bit fiddly, but making your own pumpkin ravioli is delicious and sure to impress! Choose a full-flavoured squash for best results – a watery supermarket carving pumpkin just won't do. This recipe comes with a lovely shallot and sage butter sauce and pine nuts (or you could use flaked almonds).

26 - On the Italian theme... soft, sweet squash is perfect for a creamy risotto. Use Antonio Carluccio's recipe or this one with bacon and leeks, or customise any basic pumpkin risotto recipe to your own tastes using chilli, roast garlic, pancetta, crispy sage leaves or crispy fried shallots, different herbs and cheeses, or whatever you fancy...

27 - As I've already grumbled, most pumpkin soup recipes seem to rely on lots of spices for flavour, but I think it's a real shame to mask the real flavour of the squash instead of making the most of it. Here are four new ways to try pumpkin soup!

28 - Team squash with buttery pastry, like in this great-looking tarte tatin with squash, red onions and whole roasted garlic cloves.

30 - Spread seasoned squash puree, shredded cheese and sage or other herbs on a pizza base for a pumpkin pizza! Add chorizo or bacon, chopped greens, nuts or fried mushrooms for more variety, or try this recipe with ground beef, olives and rocket.

31 - Add pumpkin to falafels, which traditionally use many of those warming spices so often added to pumpkin anyway, like in this pumpkin falafel bowl with maple tahini dressing.

32 - Make a tasty pumpkin hummus dip. Blend a can of chickpeas with the same volume of squash puree, two tablespoons each of tahini and lemon juice, 2 or 3 cloves crushed garlic, and cayenne, cumin and salt to taste. Add olive oil to loosen the texture if required, and garnish with pumpkin seeds and a pinch of paprika.

33 - Easy, cheesy fritters can by made with all sorts of vegetables and served up with salad as lunch or a starter. Try these pumpkin and parmesan fritters, varying the herbs used as you wish.

34 - Stuff it! With... just about anything you fancy, perhaps taking the list above as inspiration, or perhaps using one of these seven great recipes.

35 - Make pumpkin butter to spread on toast or add to desserts, like in this overnight slow-cooker recipe or this quicker one. (Disclaimer: I've never actually tried this... but it looks yummy!)

36 - Toast the seeds, alone or with spices, to eat as snacks or serve with drinks. Careful – some varieties have quite hard and chewy husks, but boiling them for ten minutes first and cooking them just right, like this, crisps them up and makes them much more palatable.

37 - Use your pumpkin guts – the stringy bits from the inside, minus the seeds – too! Separate them from the seeds and chop finely, in a food processor if you prefer, then add to smoothies, soups, or a cake, pie or bread recipe such as this one for pumpkin guts bread.

38 - Recreate Starbucks bestseller pumpkin spice latte (this version actually has real pumpkin in it!). Instead of canned pumpkin, use homemade and well-drained pumpkin puree, and make up a batch of pumpkin spice using this recipe.

39 - Virtually any vegetable can go into a chutney or pickle, and pumpkin is no exception! Team it with apple or other veggies and spice it up as much or as little as you like. Try Hugh Fearnley-Whittingstall's 'glutney' recipe, for which he encourages you to change the main ingredients for whatever's in season. 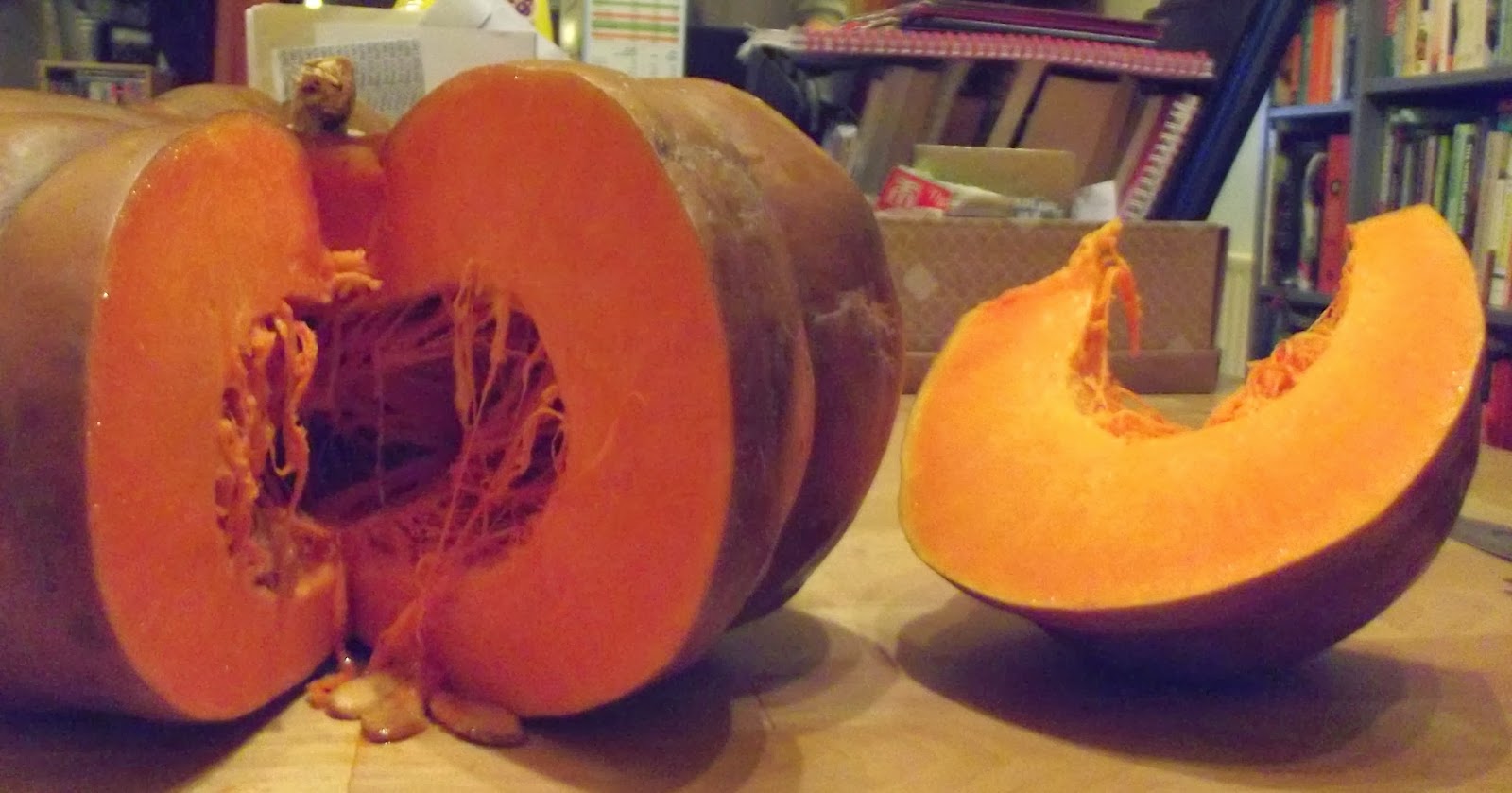