What a year! But we kept going and growing!

Despite the challenges brought about by Covid-19 we have carried on throughout the summer and autumn and are on track across our two sites to have produced around 2,000kg of veg for our members this year.

We have been restricted to fewer members on site so harvesting has taken place on Tuesdays and Wednesday and the Wednesday team have then delivered to local “hubs” for members to pick up.

At Hammonds End we have tidied away the last of the summer crops: tomatoes, cucumber, pepper, aubergine, sweet potatoes, French and runner beans, salad leaves, courgettes, carrots, beetroot, calabrese, tomatillos, boleti beans, fennel and squash but are still left with plenty to come for the winter months.

The End of the Summer Harvest: Squash, Carrots and Tomatillo

Throughout the summer the weather was reasonably kind and whilst the late summer was quite cool meaning plenty of green tomatoes (and a marvellous green tomato cake recipe!) overall we can’t complain too much. Inevitably the runner and french beans blew down again (one year they will stay upright) and we lost quite a bit of calabrese to caterpillars late in the season where the butterflies got under the mesh cover. 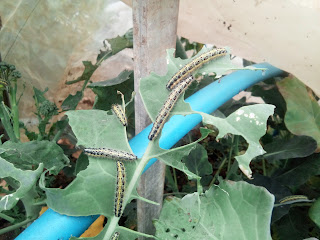 Caterpillar Damage to the Calabrese

As the remains of the summer crops were cleared to the compost heaps  we planted a green manure on some of the beds which not only did the bees love, but it also provides some protection to the soil over the winter as it rots down and will also feed the soil.

Phacelia Green Manure next to the Parsnip Bed

Outside we now have winter cauliflower, parsnips, celeriac and plenty of kale to keep us going and for a few more weeks the ever dependable chard and perpetual spinach. 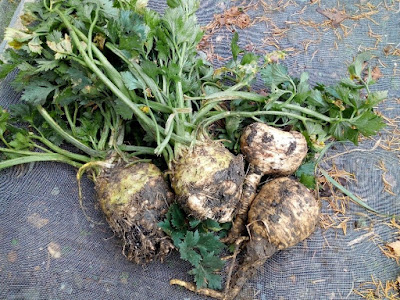 Celeriac and Parsnips harvested in November from Hammonds End, along with Leeks from Hixberry Lane made for a lovely hearty soup

We have now resown the polytunnels which will provide the harvest in the later winter and early spring. They are planted up with beetroot, winter lettuce, winter spinach, pak choi and rocket. We have to net the lettuce to stop the mice eating it. 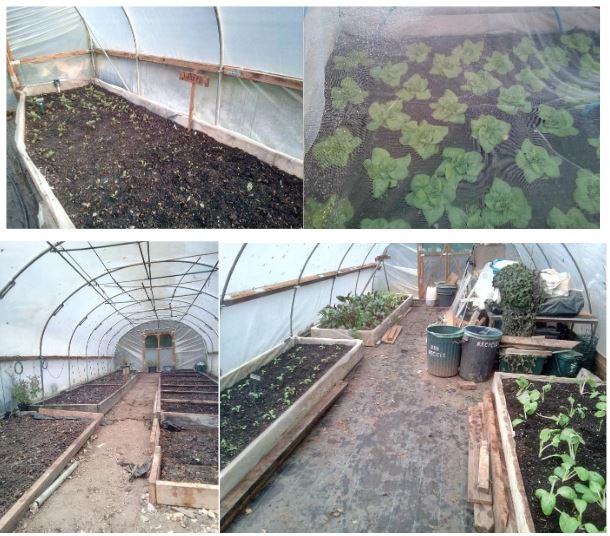 Polytunnels with their winter planting: still small but will grow over the winter for spring harvest 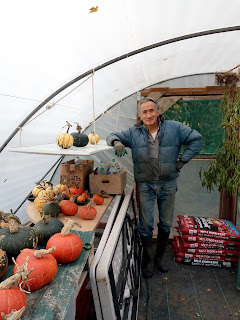 Jayne, Tony and Ron have also been busy in the polytunnel adding
a new shelf from a recycled bath side!

The end of summer brought a good harvest of squash at our Hixberry Lane site.   We find them an excellent crop to grow through the mulch of spent hops we use to feed the soil.  We take part in the Farr Brew’s hop collective and delivered the harvest from our 10 dwarf hop plants to the brewery. 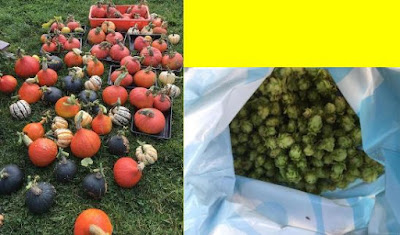 We have planted onions, garlic, spinach, turnips and mooli to overwinter but unfortunately most of our lettuce in the polytunnel have been destroyed by wireworms.

Most of our crops for this year have now been harvested.  The Hixberry site is heavy clay and prone to waterlogging and we have to be careful not to damage the soil structure.  As a result we harvest some crops a bit earlier than you otherwise might.  We have dug up our Jerusalem artichokes and have started distributing some good leeks to members.  We continue to harvest chard and still have sprouts and swede to look forward to. 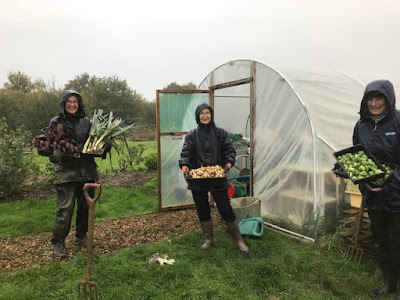 Jerusalem artichokes harvested in the rain at Hixberry

The Incredible Edible gardens have attracted a few new volunteers lately, for which we're grateful, and have really greened up again after the very dry conditions of the summer, with lots of fresh herbs and greens to offer.

Both gardens will be getting their winter tidy-up in December and we'll collect as many of the fallen leaves as we can to make leaf-mould to improve the soil next year. It's an ongoing struggle trying to find something attractive or useful that will grow in the deep shade under the trees at Russell Avenue, and we're about to try out some ostrich ferns and hostas, both of which have edible shoots in the spring! We'll also be planting lots of lovely cyclamen to brighten the garden up next autumn. 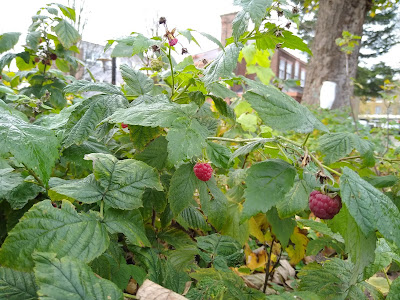 Dates for the Diary:

AGM 2nd March, via Zoom – watch out for an invite by email