What better way to start this edition than with...

Crops
Our summer boxes have been quite impressive so all the members’ hard work watering this year has paid off. Our main and best-positioned polytunnel has enabled us to grow tomatoes, peppers, aubergines and sweet potatoes. 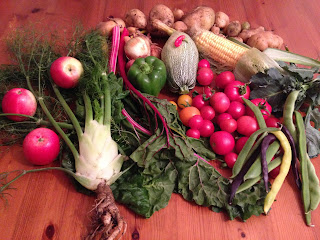 We experimented with fennel for the first time and were awarded 3rd prize at the Redbourn Horticultural show for it! Fortunately, our aim was to participate and get our name known rather than to win!

We have had some fantastic sweetcorn but we probably lost 50% to predators. Early on we saw magpies going for them and so we covered them with netting. 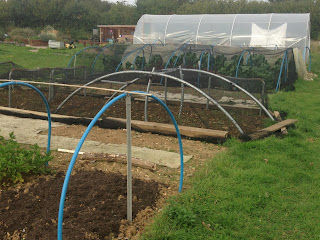 As we did for other crops, we also installed a solar powered sonic rodent deterrent as we suspected rats, mice or squirrels. 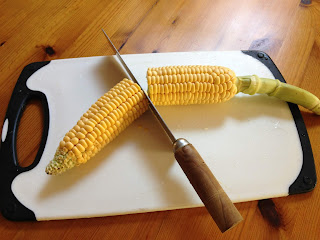 Beer
In early September, Farr Brew requested that the hop cones be harvested and delivered to the brewery. The harvest was not great with only two of the ten plants really flourishing and only one other producing any cones at all. We guess this was down to the unusually hot and dry weather.

Farr continue to support us, this time with a donation of beer for our Harvest Festival. It was good to see site manager Ian doing something other than working! 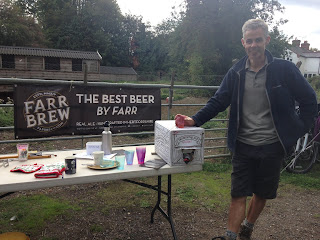 Harvest Festival
Once again, we welcomed members and Friends to Hammonds End.  It’s always a good excuse to tidy up the site (as if we didn’t have enough to do just with picking at this time of year!). The quiches, barbecue and all the food supplied by our members went down well. 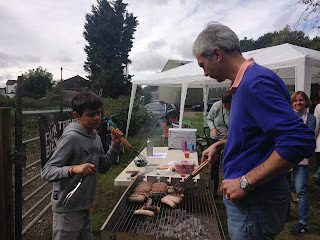 Naomi organised a cryptic treasure hunt which was a great way for everyone to take time to look at the site and exercise our brains as well as our jaws. Music from the folk trio Said the Maiden (who in 2017 won Folking Awards ‘Rising Star’ prize, and an NMG Award nomination for best Acoustic, Country & Folk Act) added to  the party atmosphere. A very enjoyable afternoon was had by all ages and might even result in a new member - David Heritage, Mayor of Harpenden said “I feel really inspired and would like to join myself”. We actually had a pair of mayors in attendance as Cllr Rosemary Farmer, the Mayor of the City and District of St Albans, came too. 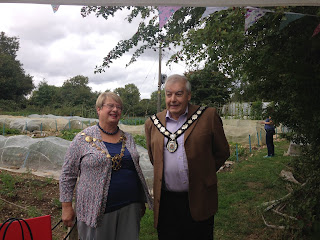 One of our Incredible Edible volunteers came for the first time and said "I am so, so impressed by what you've all achieved at Hammonds End Lane - you should all be very proud of yourselves!” So, after 4 and a half years’ work, well done to all our members.

Publicity
In the last few months I have ‘enjoyed’ appearing on Radio Verulam’s ‘Bubble and Squeak’ show with Andrei Lussman and Ruby Raut of the Foodwaste Ninjas, being interviewed at the Food & Drink Festival’s Cookery Theatre and presenting at a Soroptimist International St Albans meeting. We are now producing some slides and a script to help other members get involved in publicising FoodSmiles. 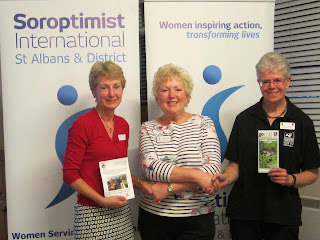 A number of us did enjoy making a scarecrow for Ayletts' Scarecrow Trail as part of their Autumn Festival. A lot of effort went into knitting and crocheting vegetables and we quite thought we would win a prize. Sadly, the voting public thought otherwise. What do you think? 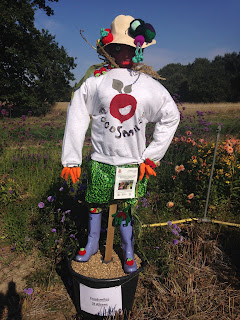 Save the dates
Our next Coffee Morning at the Courtyard Café will be on 21st November, and our AGM on 12th February. More information will follow.

Finally, a seasonal recipe from our friendly chef, Alex (now working at the Lower Red Lion): 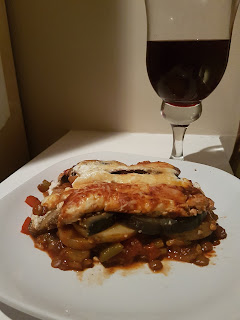 Method:
Slice the aubergines to 1 cm thick, sprinkle with salt and leave in a colander to drain for 20 mins. Get on with other stuff whilst waiting.

Dice the onion and slice the celery. Fry off with a little oil. Dice the peppers and cut the courgette into wedges. Add to the pan. Squish the garlic and add. Next add the lentils, the tomato puree, the red wine and the flavourings. Bring to a boil and then reduce the heat and simmer for 10 mins.

Slice the potatoes to ½ cm thick and boil them for 2-3 mins. Drain and leave aside.

Grate all the cheese and put half in a bowl, then add the rest of the ingredients for the topping to the bowl. Mix together.

Wash the salt off the aubergine and fry in a pan with a little oil until soft.

You are now ready to assemble. Lentil stew goes into the base of your roasting dish, next a layer of potatoes, then the aubergine, then the yogurt and finally, finish with the remaining grated cheese. Bake in the over for 30 mins at 180°C or until the cheese is a dark gold.
at October 10, 2018
Email ThisBlogThis!Share to TwitterShare to FacebookShare to Pinterest
Newer Post Older Post Home